Way back in January this year I signed myself up for a simulated game day at Bisbrooke Hall in Rutland with the Shotgun and Chelsea Bun Club. Having been to a number of clay shooting events and practicing at my local ground, I was inspired to try something different, but not quite ready to experience game shooting (or to wait for the season to start later this year), I thought this could be the perfect answer. I was not disappointed.

A simulated game day is ran much the same as a traditional days game shooting, with the exception that you shoot clay pigeons instead of pheasants, partridge and grouse. Simulated game days are perfect for all types of shots – used by members of the shooting community who want to brush up on their existing game shooting skills (Pheasant shooting season is from 01 October – 01 February) in preparation for the upcoming season, people who do not wish to shoot live game but want a taste of a day out shooting in the beautiful countryside, or people who want to start game shooting but want a ‘dry run’ first.

Situated in the glorious rolling hills of Rutland, Bisbrooke Hall is a beautiful family owned estate who have been offering game shooting for many years. However, keen to keep the season going for as long as possible, they have recently started to run simulated clay days in the very same locations as the traditional game days. Sensing that I may need some encouragement and team support, I booked my place through the Shotgun and Chelsea Bun Club, knowing that I’d be surrounded by a bunch of like-minded ladies who were up for a great time.

Well we arrived at around 9.30am and were escorted to the Great Hall to be greeted by our wonderful host Patrick and his equally wonderful father Robert armed with bacon sarnies and tea (who could ask for a better start??). Once we had been fed, watered and briefed on the days activities including safety talks and the draw of pegs (the location where you stand within the drive), we were loaded into a trailer and taken to our first drive.

Our first ‘drive’ (this is the location where you shoot) was in the middle of a wheat field on a hill surrounded by fields as far as the eye could see. The clays on this drive were extremely fast and high – simulating high driven pheasants. We were paired off and two people shared a peg – one shooting first and the other loading for them and then vice versa. The starting signal went and we waited for clays to start coming. Unlike a clay ground, you have no idea when or where the clays are coming from (the same as a traditional game day) which really makes you shoot on instinct and sharpens up your reactions!

We then moved on to a second simulated pheasant drive in a different location on the estate, the clays here were slightly lower and again coming from all angles providing a different type of shooting to the first drive.

At the end of this drive, it was time for elevensies – consisting of sloe gin, fizz, soft drinks and snacks brought to us by the lovely Rosie and served from the back of a Land Rover. This gave us a chance to have a good gossip to the rest of the team – there isn’t much time for chat when shooting and you are spaced out for safety.

The third drive was just a short walk away from our second and was the last drive before lunch. Fuelled by such fantastic hospitality and really in the swing of things by this point, we were faced with a fast and furious tirade of simulated grouse to really test the guns. This definitely got the team shooting – there were so many clays overhead that we couldn’t load our guns fast enough! 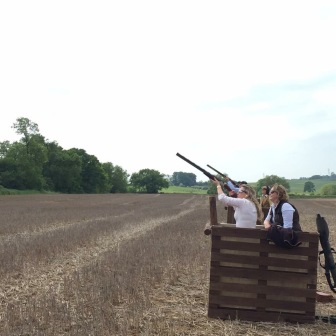 After the Grouse drive, we were driven back to the Great Hall for a well deserved break and a delicious home cooked lunch, consisting of cottage pie and the most amazing sticky toffee pud! This gave the team a good opportunity to talk through the days shooting so far and everyone was in high spirits and looking forward to the final drive after lunch, although it has to be said some of us had enjoyed lunch a little too much and were struggling to move from our seats…

After lunch we were taken from the Hall to our last drive in our trailer which had been our transport for the day. With the sun still shining and everyone looking forward to what Patrick had in store for a final drive, we made our way through a field full of sheep and lambs to our pegs. The last drive of the day did not disappoint and everyone finished with a huge smile on their faces.

After the final drive we were taken back to the Great Hall one last time for a parting cup of tea before heading home.

We all left Bisbrooke feeling extremely happy, very tired and very full! I couldn’t have asked for a better day for so many reasons, the weather was sunny and warm (maybe a first for a Bank Holiday weekend?!), we were surrounded by the most picturesque scenery, the hospitality was superb, the team were wonderful and of course, most importantly, the shooting was fantastic. I learnt so much and definitely saw an improvement in my shooting by the end of the day. I also made a bunch of great new friends and really feel inspired for the start of the game season. I couldn’t recommend one of these days highly enough!

Team S&CBC! The wonderful group of ladies including founding member Victoria on the final drive

I really hope that this post has given you a taste for simulated game days and that it may have encouraged some of you to have a go yourselves. I am signing myself up for another as we speak! There are plenty of private shoots offering simulated game days but if, like me, you’d like a bit of moral support I would recommend attending one of the days ran by the Shotgun & Chelsea Bun Club. There are a number of simulated days already in the events calendar which you can view here. You won’t regret it I promise!