So some of you may have already seen that I had a rather unusual start to my weekend last week, I went to shoot some clay pigeons (not at all unusual since it’s one of my biggest hobbies), with the Femmes Fatales ladies (again, not unusual – you know how much I love the club), in front of the BBC. Yep, that’s where the unusual part comes in! 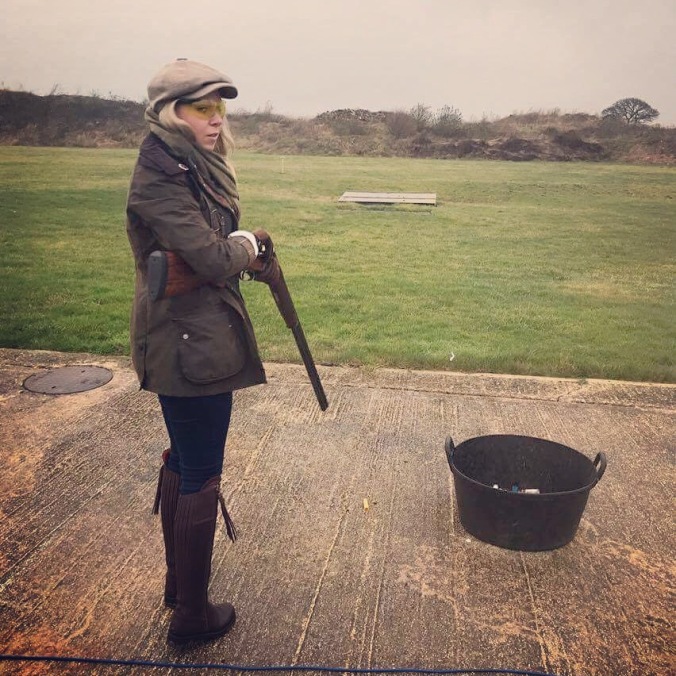 I know, it’s a little bit strange so let me give you a bit of inside-hot-off-the-press gossip! A group of regular Femmes Fatales attendees were asked to go along – the offer was also open to absolutely everyone who follows FF on social media, another thing I love about them- it doesn’t matter who you are, you’ll be included – for an informal meet up. Smash (or Slay as the FF saying goes!) some clays, have a bit of a catch up, oh and just be filmed and interviewed by a BBC presenter! I have to say I was a little nervous of the latter part – I am TERRIBLE for getting nervous when people are watching me, ask my Brother or James who regularly have to put up with my moaning “oh I only missed because I was getting in a flap because they were stood right behind me…”

So why were the BBC coming to film us? Well, BBC Look North wanted to do a feature on women’s shooting and with Femmes Fatales being one of the biggest Ladies shooting clubs in the country – note I said one of, which just shows how much the landscape has changed already for lady shots – they naturally wanted to speak to ladies who attend the events to get a true insight as to why we want to be involved in the sport! Naturally they also wanted to pick the brains of one of FF’s leading ladies – Lydia, who even more naturally declined and told Sarah Walton (the BBC lady – you may have seen her present BBC sport as well as Look North for those in Lincolnshire and East Yorkshire) that Femmes Fatales was about the members and that she should speak to them instead.

What did we have to do?

For the most part it was like any other FF gathering, a chance to have some fun and catch up with friends – old and new. However, we were being filmed shooting and were interviewed so there was a little more pressure than usual! (un)fortunately for me, I happened to be the only girl with a 20 bore gun, which is quite remarkable considering 20 gauge’s are lighter and are often seen to be more well suited to ladies – I guess the other girls are just more bad-ass than me! (But my comeback is that 20 gauge shotgun’s have a smaller shot pattern, so you have to be more accurate..or so my instructor tells me to make me feel better!). Anyway, this meant that I was the only choice for Go-Pro filming. Yep, I had a Go-Pro camera fitted to the top of my barrels so that viewers could see the shooting from the shooter’s perspective. I have to say, it was great fun and I’m sure it will make for some great footage for those that haven’t had the opportunity to have a go at shooting before. But equally – trying to shoot with a huge Go-Pro camera attached to your gun does absolutely nothing for your ability to shoot – I was basically shooting blind! 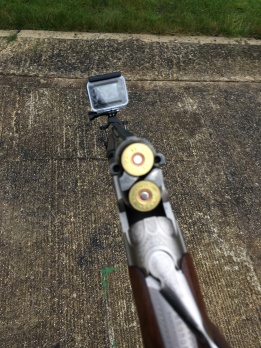 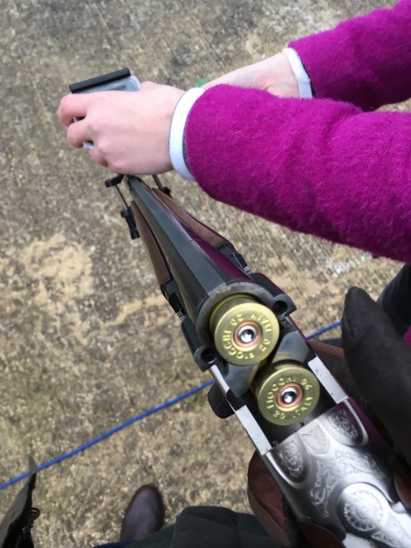 We were also interviewed about our involvement in the club, what we think about the FF group and women’s shooting in general. This bit was much easier for me – well not the speaking in front of the camera bit, if any of my talking footage actually makes the program you’ll notice I say “it’s great” A LOT – but what to say was easy. I tell you guys all the time, to be honest I’ll tell anyone that wants to listen and for no agenda other than how much I love the group and what it has done for my ability to shoot but also my confidence and social life. 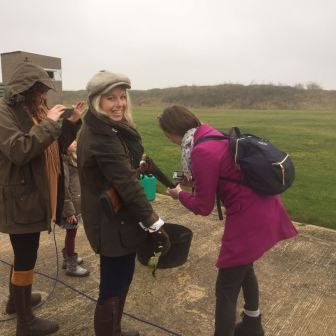 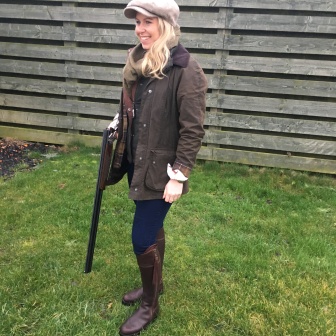 My ‘I’m smiling but I have no idea what I’m doing face’..just before being quizzed by Sarah!

Femmes Fatales is a brilliant opportunity to encourage women to try clay pigeon shooting. For a start, we need more ladies in the sport – after all we don’t want the male dominated stereotype to prevail any further, this is 2017 and in the words of Beyonce – who run the world? GIRLS. It’s also the best place to meet new friends, get outside, do something different (or not so different depending on your experience with shooting!) or just have a day out. Everyone’s welcome, and I really do mean everyone (as long as you’re a girl, obviously) whether you are our British Open Champion, aka my Peg Share from Game Day – Hannah Gibson, or you’ve never even lifted a gun before. It’s not about how good you are, it’s about inspiring people to give it a go, giving confidence – which is definitely something I needed with my shooting, and encouraging each other. I mean, if we don’t stick together as girls, what chance have we got?

It truly is an inclusive, empowering club to be a part of – in the words of the girls themselves:

We want to share that passion with like-minded women, ones that are driven, ambitious and independent – Women that have a love for fashion, partying, high heels and lipstick, but also like the smell of gun oil and aren’t afraid to get their boots muddy

I can’t get across in a blog post how much the club has done for me – both in terms of shooting and socially. I have met some of my best friends through the club and because of that I sometimes wonder if I need a PA because there’s always something to get involved in or attend!

But what about the BBC?

I admit it, I lured you in a little bit – the BBC were absolutely there to film us, but I’ve basically told you why and what we said. BBC interview or not, I always try to encourage people to give shooting a go and I’m always banging on about the wonderful clubs we have available to get involved with. And this is no different – there’s so many events ran by all of the amazing FF Team (all volunteers by the way, who just want to host an event because there as passionate about spreading the word as I am), all over the country that there really isn’t any excuse. Oh – they also have some epic prizes on offer for all abilities – and there’s always a great lunch, which is usually reason enough for me! You can see the list of events and book on to one here.

Don’t just take my word for it…

Femmes Fatales have been nominated for a Yorkshire Choice Award in the Sporting Achievements of the Year category and as they’re up against some Olympic heros I wanted to mention it to you guys. Whilst all of the nominees are deserved of the award, I really think the Femmes Fatales girls should get it – they have introduced so many people to the sport, encouraged women to push themselves, whether it be giving it a go for the first time – or inspiring experienced ladies to achieve even more that I really think the team should be recognised for all of the hard work they do – giving up their own free time, which is so precious these days, to encourage, motivate and inspire others to try something new. If you, like me already think they club is fantastic, I’d love it if you could vote for them, I’ve even given you the link here so there’s no hard work involved – they deserve a bit of recognition!

Oh P.S. you can catch our interview on BBC Look North this week – I’m a mixture of nervous/cringing/excited about the whole thing! It certainly was a brilliant experience.